and the global COOLING evidence

Global warming has been the cry of government climate scientists since the 1980’s. But actual government data proves global cooling has taken over from warming during this century, as per the official U.S. satellite records (see graph). 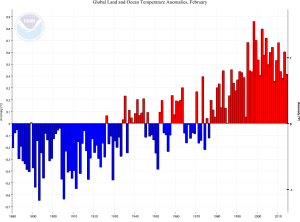 Global land and ocean temperature anomalies as at February 2014
Anomalies are with respect to the 20th century average
http://www.ncdc.noaa.gov/cag/time-series/global

What’s interesting about this graph? Well, first we see that, since 1977, the world temperature has been consistently hotter than the 20th century average. But if we look more closely, we can see that the heat has been abating since 1998.

This data has been collected by NCDC (National Climatic Data Center) which is part of NOAA (National Oceanic and Atmospheric Administration), a scientific agency of the US Administration. NOAA is an international leader for temperature data. The two others are NASA’s GISS in the US, and the UK’s University of East Anglia’s CRU (Climate Research Unit), working jointly with the Hadley Center (of the Met Office).

The GISS webpage cannot be accessed presently at: http://www.data.giss.nasa.gov/gistemp, but HAD-CRUT did publish their graphs for February, which confirm the new cooling trend: http://www.cru.uea.ac.uk/cru/data/temperature/HadCRUT4.pdf

Government-financed scientists, who collect and interpret the data, have in the past done their best to “hide the decline” (Climategate). Today, unfortunately, climate science continues to be corrupted by billions of dollars of government money. NOAA are arguably less corrupt than the other two, but they are still very much so in the way they present things. On their webpage below we can read: “Arctic winter sea ice extent is 5th smallest since 1979”. It would have been more objective to say: “… is larger than in 2012, and the 5th smallest since 1979”. 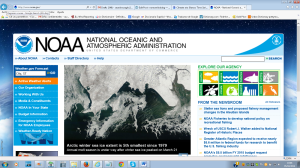 The following title, on the other hand, was objective: “Surface melt on Greenland Ice Sheet back near average in 2013.”
http://www.climate.gov/news-features/featured-images/2013-arctic-report-card-surface-melt-greenland-ice-sheet-back-near 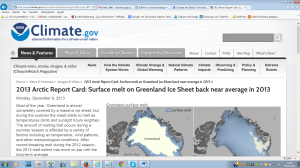 NOAA: Greenland melt back near average in 2013

Anyway, what’s interesting is that we are witnessing a reversal of the warming trend. This was expected by “climate skeptic” scientists, who’ve been arguing for years that cooling and warming follow the variations of solar activity, not the emissions of CO2.

As solar radiation has been declining lately, it is not surprising that world temperature should be declining as well. Never mind the ritual IPCC flapdoodle* – political gesticulation meant to scare us into accepting carbon taxes and subsidies to the wind farm scam. Politicians won’t give up dishing out money to the wind industry, as part of it is returned to finance their electoral campaigns. They LOVE that “green” revolving door.

In fact, we are half-way into solar cycle 24 (the sun’s activity follows cyclical patterns, the shortest lasting 10-13-year). Solar cycle 24 happens to be the weakest in 100 years. We are presently near or past its peak, and from the graph below you can see how low it is in comparison to the previous cycle.

NOAA: Solar cycle 24 is peaking much lower than the previous one

As we pass the peak, more cooling is to be expected. If solar cycle 25 is weaker still than # 24, temperatures could drop to the level of the Little Ice Age, a cold period from 1550 to 1850, which saw the Thames frozen solid, and crops rotting in the fields from too much rain. This prompted many Europeans to emigrate to America. In France, which was Europe’s grain basket, starving Parisians took to the streets asking for bread. Soon they developed a fancy for the guillotine, and executed their rulers. This begs the question: will history repeat itself?

If a “little ice age” would happen now, with 7 billion people on earth plus 75 million added every year, skyrocketing food prices and mass starvation would ensue. Yet, foolishly, our governments keep wasting money on ineffective wind turbines to cool (sic) the climate. Perhaps they do deserve the guillotine after all?

If an ad appears below, it’s from WordPress. Nothing to do with this blog.

4 thoughts on “The global warming flapdoodle …”